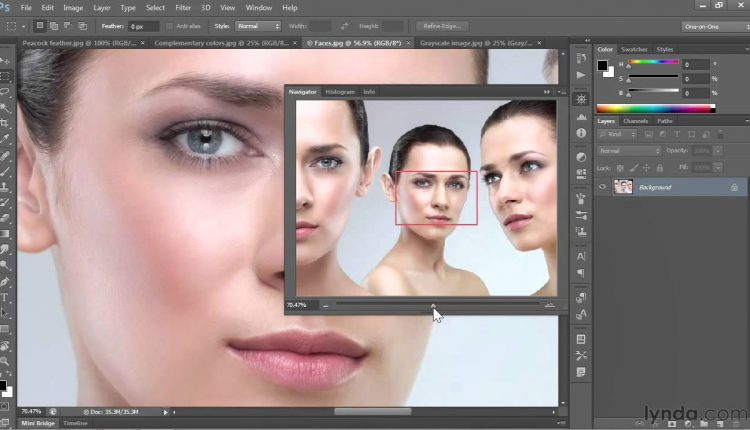 A major advantage of digital photography is being able to easily rewrite history – you can make changes to the photos before printing or displaying. There are a variety of software packages that will allow you to do this – some photo album software will allow simple touch-ups, like Google’s Picasa, Apple’s iPhoto or LView, while more complex packages offer more diverse editing flexibility and more professional results, such as Adobe Photoshop, or Corel Paint Shop Pro. Most software packages offer inline help features and tutorials to guide you through these techniques and more.

Common edits to photos include the elimination of red-eye, which many software packages can do with a simple click of a button, and the removal of an unwanted item from a scene, like a stray swimmer or unwanted car on the road – this is called cloning, where the software samples one section of the image to replace the other. By using parts of the original image, the colouring and texture are the same, so results are good enough to fool almost anybody. Another common touchup is to adjust the amount of light that was available when the photo was originally taken – literally, changing how bright some colours are to others, and how bright the image looks overall. For example, this can make a dark photo look brighter, or a dull photo more vivid.

Another simple correction that can be made is to rotate the photo so that the horizon or objects captured appear straight. This is often more than simply rotating the image 90 degrees one way or the other, from portrait to landscape, but instead levelling the photo so that it looks straight. Because of the perspective of the photo, it may not be possible to make everything level at once, so you should use the horizon as your ruler, or take a dominant object in the scene, like a person or building, and use that as a guide.

Cropping can be another powerful editing tool, especially with newer cameras that have a greater resolution (giving you a larger source image to work from). Cropping trims off unwanted parts of the photo leaving you with the parts you want to keep. This can have a significant effect on the photo, since you can change the balance, composition and drama of a photo, for example, in a photo where a subject was centred, you can crop off more on one side to align objects with the rule of thirds, or remove portions of the background, like a building, tree or stray person. You can also crop a photo to change it from landscape to portrait, leading to a more interesting picture than the one you originally took.